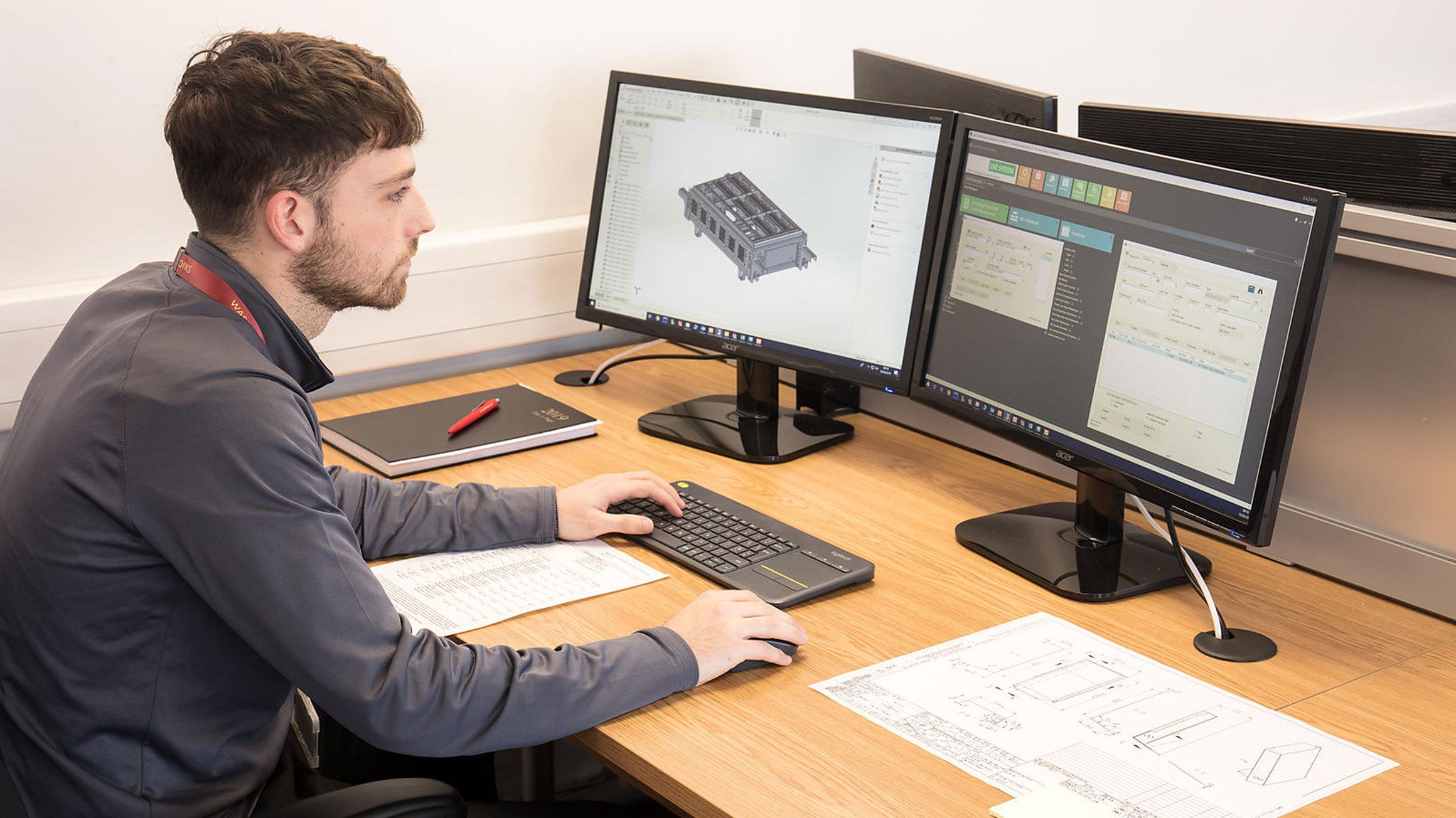 Our 22-year-old Junior Contract Manager, Kieran Dixon, shares how Washington Metalworks has helped him progress from a sheet metal work apprentice to a managerial position in just 5 years. He discusses everything from leaving college, his future goals and ambitions…

During my first year of college, I realised that academia wasn’t for me. Essays didn’t interest me, sitting still wasn’t stimulating, and no matter how hard I tried, I couldn’t feel inspired. I craved something more hands-on and proactive. Eager to go beyond the classroom and learn through experience, I eventually made the decision to leave college and pursue an apprenticeship.

Before I could jump straight in, I had to choose a scheme that would bring me the best opportunities - at a company that I could grow and thrive in. But with a multitude of apprenticeships available, that decision felt overwhelming. I spent lots of time researching different schemes and businesses until eventually, I came across Washington Metalworks. The company was offering a 4-year apprenticeship in sheet metal manufacturing, which integrated qualifications, specialised skill training and personal progression plans.

Shortly after I submitted my application form, I received an email offering me an interview at the Washington Metalworks factory. Within minutes of being interviewed by Tom Swinburn, the company’s Manufacturing Director, I became even more certain that this was the role I wanted to pursue. Tom spoke passionately about the business’s cutting-edge machinery and exciting new projects, making me eager to be a part of it all. I chatted through my interests and skills, explaining that I took a lot of hands-on subjects at school such as Design Technology and that I’d researched a lot about metal manufacturing prior to the interview. I must have made a good impression because soon after, I was offered the Sheet Metal Worker Apprenticeship position.

The initial period of my apprenticeship predominantly took place at college, where I was taught the basics of sheet metal manufacturing. I learned how to operate the machinery, how to handle metal and how to manufacture safely and efficiently. As my knowledge grew and the course progressed, I worked at the factory more and more, implementing the skills I’d learned into real-life situations. I became experienced in the various stages of sheet metal work production, from cutting, punching and bending through to coating and painting.

A significant moment in my apprenticeship occurred when I completed the Computer-Aided Design (CAD) module. My college tutor noticed I was exceeding in the area and was impressed with the CAD assignment I submitted. My good work was brought to the attention of Washington Metalworks’ management team, who arranged for me to foster my talent further by spending one day a week in their CAD office. It was this experience that would later aid my promotion to manager, but I’ll get to that shortly.

After four years of training and working, I completed my apprenticeship at Washington Metalworks. Not only did I achieve a Level 3 NVQ Sheet Metal Work qualification, I was also offered a permanent position as a sheet metal worker. I was thrilled! The hard work had finally paid off and I’d earned a career that I loved. What’s more, it meant I could work permanently with the hardworking team who’d become my friends over the years.

But the learning didn’t stop there. Because at Washington Metalworks, no two days are the same. Soon after my Sheet Metal Worker Apprenticeship, the company received a large-scale contract in aluminium. Although I’d worked with this material during my course, my expertise lay with mild steel metalwork. Aluminium is a lot softer and it requires different methods to weld. I knew that if I was going to deliver this project to the company’s thorough standards, I had to perfect my skills further. To make sure this happened, the company instigated more aluminium training programmes. Along with the rest of the team, I mastered new techniques and tools until aluminium sheet metal work became a breeze.

Just four months into my role as a qualified sheet metal worker, a Junior Contract Manager position opened up at the company. Noticing that I’d excelled throughout my apprenticeship and the months that followed, the management team decided that I would be the perfect fit. After all, my apprenticeship had given me extensive experience throughout the entire factory, while my time in the CAD office meant I was equally skilled in the computing side of the business. I had enough expertise and company know-how to progress further. And that’s why I was given the job.

Being promoted has been the proudest moment of my career so far. But with my responsibilities growing significantly, it’s also been a big jump. Instead of being accountable for just one stage of the sheet metal manufacturing process, it’s now up to me to oversee entire projects - from design through to delivery. It’s hard work, but I love it. Because being challenged means I’m never bored.

Looking Forward to a Future at Washington Metalworks

With so many learning opportunities and constant room for progression, I can’t wait to see what the future has in store for me at Washington Metalworks.  At 22, I’m already climbing the ladder fast. And it’s my goal to climb even further. My advice to anyone else who’s trying to progress in their career is: Never stop learning. Seize any opportunities that come your way and never be afraid to adapt.

If you’re interested in following a similar path to me, Washington Metalworks are currently looking for the next generation of ambitious, hard-working sheet metal worker apprentices. To find out more and apply for a position, visit our Careers page.